The many mysteries of karst

This is detective work on a scale unimaginable to most detectives, with the notable exception of Sherlock Holmes, who was, with his discoveries and interpretations of little bits of grit from Blackheath or Hampstead, the first forensic geologist, acknowledged as such by geologists to this day. Holmes was a fiction, but he started a branch of science; and the science, with careful inference, carries fact beyond the competence of invention. Geologists, in their all but closed conversation, inhabit scenes that no one ever saw, scenes of global sweep, gone and gone again, including seas, mountains, rivers, forests, and archipelagoes of aching beauty rising in volcanic violence to settle down quietly and then forever disappear—almost disappear. (McPhee 1981, pp. 81–82)

Beneath the towns and fields of the Irish Midlands lies a vast and largely unmapped volume of fractured limestone. In speaking to its origins, geologists evoke time scales that sit uneasily with the patterns of everyday life (Meehan & Parkes, 2014). 400 to 300 million years ago, Northwest Europe was pushed down by tectonic forces and covered with water. The coral reefs and other life forms that lived in this shallow, tropical sea must have been plentiful, for when they died their bodies sank down to the sea floor and, with time and pressure, were pressed into a rock layer hundreds of meters thick. As the millennia passed, Ireland drifted northward and new geologies were laid upon the old, sometimes persisting but usually eroding away. Warmer stretches of weather meant higher levels of rainfall, accelerating the processes of erosion. Cracks, gaps and fissures were opened in the Carboniferous limestone, allowing water to percolate down and leading to further chemical dissolution. Slowly but surely, much of Ireland’s 30,000 km2 of lowland limestone was transformed into a varied and complex karstic landscape (Drew 2008).

Karst is soluble rock (such as limestone, marble and gypsum) that has developed into an extensive underground system of passages and caves. This subsurface labyrinth allows water to move in fast and often unpredictable ways, posing all sorts of challenges for drinking water management (Coxon, 2014). In order to understand why this is so, it is necessary to reflect on the many mysteries of karst.

Karst landscapes are dependent on the local geological processes that produce them. Nevertheless, certain features are repeated and have been recognised by the Geological Survey of Ireland (GSI) (see also Todd & Mays 2005). Dolines are enclosed depressions in the land where water is able to infiltrate the epikarst, often carrying with it nutrients from the surface. These can collapse into sinkholes or swallow holes, which can, in turn, act as major sites of ingress into the underlying aquifer. Sinking streams lose water into the ground, causing their total volume and flow rate to decrease as they progress. Once it has entered into the epikarst, water moves through cracks and caves before re-emerging or settling into the aquifer. A spring is a natural point of discharge, where the water table intersects with the surface topography. Spring flows can vary due to changing weather conditions, particularly rainfall levels. Turloughs are disappearing lakes, which form and then retreat as the water level moves up and down with the seasons. The spring that produces a turlough might, at a different time of year, become a swallow hole. When a karst feature enables both water infiltration and discharge it is referred to as an estevelle. Together these terms form the basis for the GSI’s classification scheme, which shapes what Irish geologists perceive, measure and record during their fieldwork. 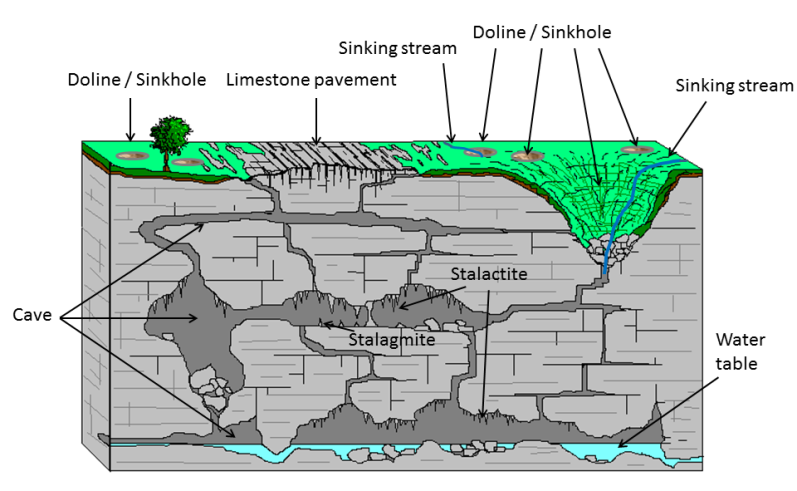 In early October, we participated in the annual field trip of the Irish Group of the International Association of Hydrogeologists (IAH). This year’s trip was to County Roscommon, where the GSI are currently undertaking a groundwater protection pilot for the National Federation of Group Water Schemes. Over the course of the day, we visited a handful of karst features in the area that have a bearing on local water quality. The Carrowreagh swallow hole, pictured below, was one such feature. It was obscured by heavy plants and shrubs, making it difficult to see from the nearby road. Without an intimate knowledge of the land, it would be easy to drive past it every day without knowing what it was. Cows grazed in the fields immediately surrounding the swallow hole, moving freely into and out of the stream which fed it. Nearby, two houses lay unoccupied, legacies of the Celtic tiger. 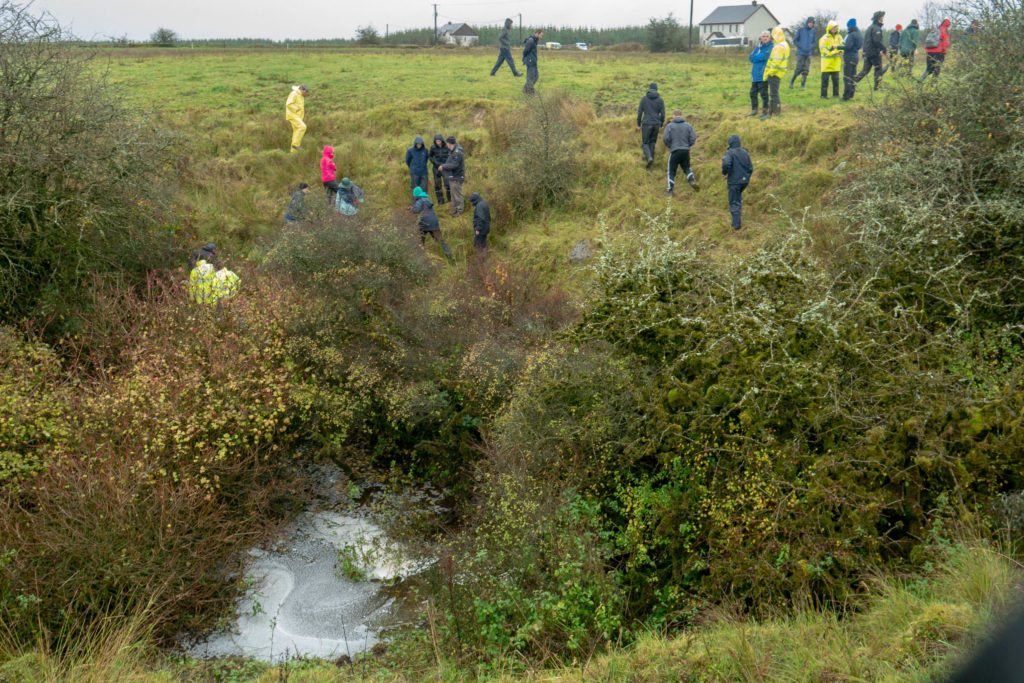 Geologists have used a method called dye tracing to determine where water entering the Carrowreagh swallow hole re-emerges. A dye poured into the hole was detected four days later, discharging from a spring in Cloonyquin, some 7 kilometres away. But without further testing, geologists cannot be sure that this is the only path that water will follow. When the water table is at a different level, say at a different time of year, the water might return to the surface elsewhere. Furthermore, there is no guarantee that the underlying karst structure will remain the same. Rubbish, organic material and sediments can clog up its underground passageways. Further erosion or structural collapse can open up others.

Karst features make for complex interactions between the surface water and groundwater. This leads to uncertainties and unknowabilities about the movements of water, and the origins of the nutrients and contaminants that it carries. It has been estimated that 20–25% of the world’s population depends upon karst aquifers for their water (Ford & Williams 2007). In Roscommon, many of the Group Water Schemes abstract from naturally formed springs and upwellings. These provide a constant source of water, but are highly susceptible to contamination from agriculture and poorly fitted septic tanks. New wells may be able to help, if they could be bored in such a way that water is drawn out from beneath the karst aquifer, where slower processes are likely to filter or bypass many of the contaminants. Efforts to achieve this in the area, however, have so far been unsuccessful.

The water management problems posed by karst were made clear to us during the IAH field trip. Several years ago at the Ogulla Spring, a water source for the Mid-Roscommon Group Water Scheme, a large rainfall brought a high concentration of nutrients into the water immediately upstream of the abstraction point. This lead to an algal bloom, which had catastrophic consequences for the quality of the water. Witnesses spoke of an unbearable stink to the site, that made it difficult to be around, let alone drink from. The pump was turned off for six months as the local ecosystem recovered. While it is possible to speculate about how this occurred, there are enough mysteries about the movement of water through the ground that it is impossible to know for sure. Enacting changes to prevent this from recurring is possible, but a targeted response will require further efforts to decipher the area’s underlying karst system.

The website of the Geological Survey of Ireland is a fantastic resource on karst geology and ground water protection. The series on ‘Understanding Irish karst’ is a great place to start. More on the dye tracing conducted in Roscommon can be found in an article on the ‘Rathcroghan Uplands’, and for those willing to dig into the details, take a look at the ‘County Groundwater Protection Schemes’.

Blog
Geographies of Catchments Data
Co. Mayo 11.12.2018
We use cookies to generate data about how you use the website.Ok