During our trip to Monaghan in July 2018, we took in the view from the Stranooden abstraction point: rolling hills partitioned by agricultural fields were yellowed by the summer’s heat and production. Despite a widespread drought, the trees and grasses had managed to retain some of their greens and were surrounded by calming blue skies and water. It was still and peaceful. 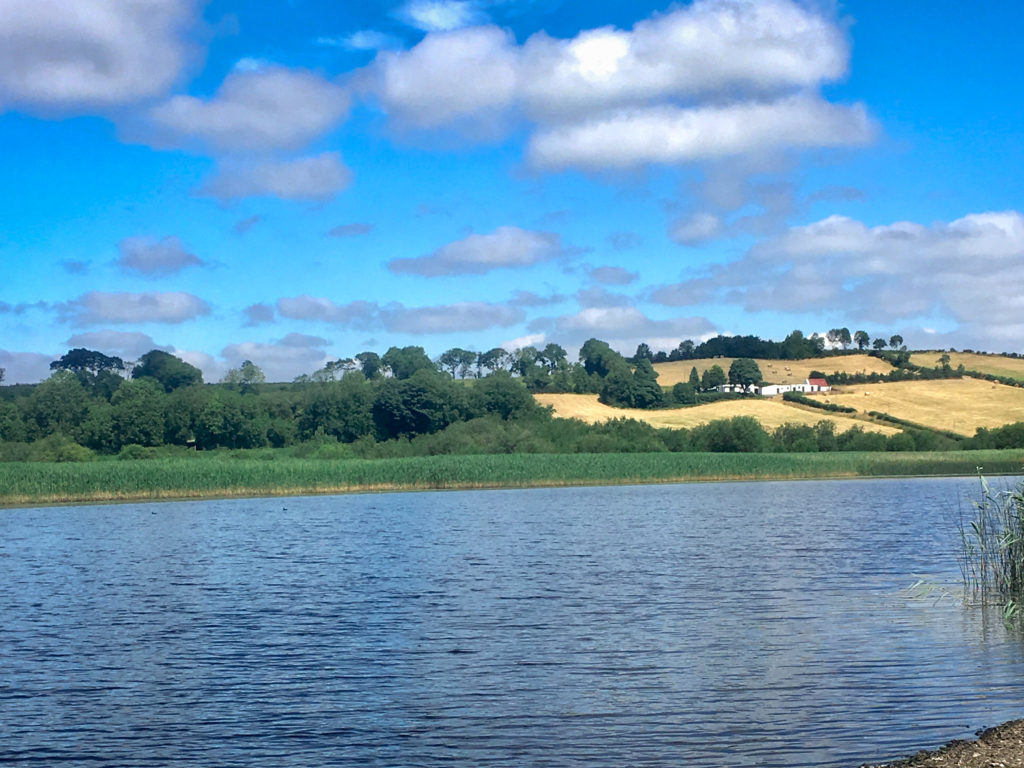 Scenes such as this view from the Stranooden Abstraction Point are usually taken to represent Ireland’s green and benign countryside – an image that has been sold around the world. But this is not the only way to perceive such landscapes.

Ireland never had the scale of urban industry we associate with Manchester, Turin, or Munich. But industrial landscapes are not limited to cities. By one definition, an industrial landscape is “the landscape resultant from a thoughtful and systematic activity of man in the natural or agricultural landscape with the aim of developing industrial activities”. Since the 1970s at least, large parts of rural Ireland have undergone significant landscape change as our agricultural system shifted to pasture-based, intensive livestock farming. Between 1984 and 2014, the number of dairy farms reduced from 80,000 to 17,500. Over the same period, there was a 48% increase in output per cow, a 470% increase in output per farm, and a 340% increase in the average herd size (from 18 to 64). These developments were driven by successive national governments, EU agricultural policy and a globalising market for dairy-based products.

From one perspective – the one that is more easily measured – these developments in the agricultural sector are taken as signs of progress: technological, economic and institutional innovations that boosted productivity, reduced costs and stimulated growth. From another perspective, these developments resulted in reduced employment in rural areas, consolidation of land in the hands of fewer, larger farmers, vertical integration of farmers into global supply chains (in which they have little power to influence price or quality), and a cascade of cumulative ecological impacts that have only recently begun to gain attention. These latter include GHG emissions (the agricultural sector is responsible for the highest proportion of emissions in Ireland – more than transport or energy generation); deteriorating water quality through run-off from fertilizers and slurry; loss of biodiversity through the expansion of grasslands; and soil degradation through impaction of heavy machinery and over-use of fertilizers.

When we stood at the Stranooden Abstraction Point on that sunny morning it was well that a member of the National Federation of Group Water Schemes (NFGWS) was there to remind us of these legacies. He had us listen to the quietness. There was no buzz, no hum, no sign of insects. What we had first perceived as rural peace and calm now indicated something darker. There were no sign of flowers or vibrant colour in the uniform green. These absences marked the area’s diminishing biodiversity and signaled the challenges the hydrological system faces from the area’s land use that is dominated by industrial agriculture.

Blog
GWSs adapt over decades
Co. Monaghan 10.07.2018
We use cookies to generate data about how you use the website.Ok