When microbiological contamination poses a risk in water supplies, Boil Water Notices issued by water authorities, such as Group Water Schemes (GWSs) or Irish Water, direct water users to boil water prior to any consumptive use. How boil water notices impact people’s lives, however, is often a function of where the contamination risk is detected.

Contamination of water supplies can cause serious implications for human health. Water can be contaminated by pathogens like Cryptosporidium, a protozoan parasite that causes the disease cryptosporidiosis, an acute gastrointestinal disease that can be life-threatening for the immunocompromised. Cryptosporidium that sickens humans typically originates in human or animal faeces, and thus urban waste and agriculture are key sources when it is detected in water supplies. In the last ten years, Ireland has had the highest (2008-2011, 2013, 2015-2016) or the second highest (2012, 2014) rate of cryptosporidiosis in Europe. While the disease often lasts just days or weeks, its risks are experienced differently across the country.

In the spring of 2007 in Galway an outbreak of cryptosporidiosis resulted in more than 240 confirmed cases and an estimated 496 would go unreported in what would be the largest outbreak in Ireland.  A boil water notice was put in place until new water treatment was put in place to keep cryptosporidium out of the water supply. Galway’s outbreak was contained after 158 days.

Below, we’ve mapped Boil Water Notices to understand how they are experienced on different time scales in different places. 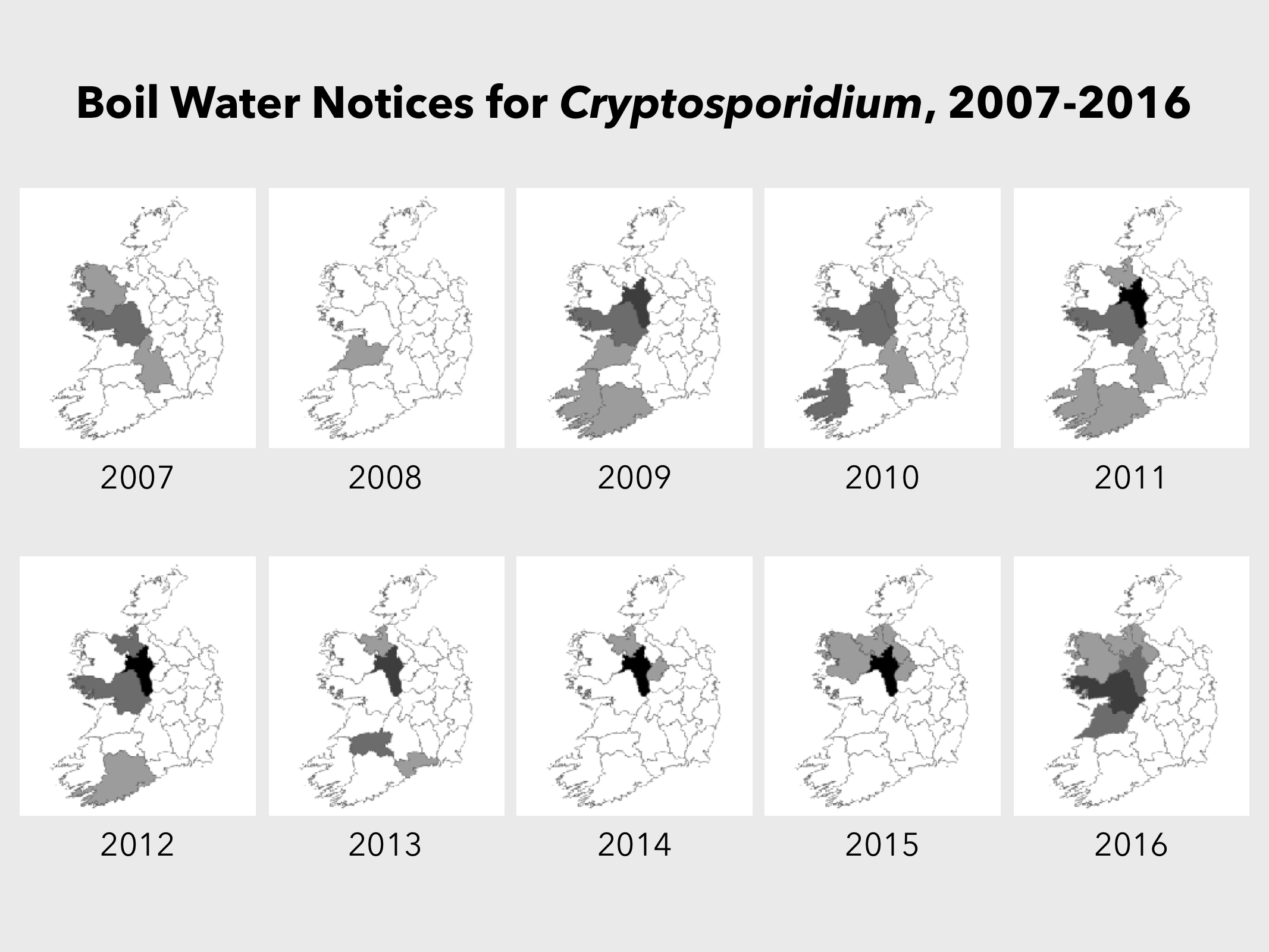 Cryptosporidiosis is an acute disease, but its risks are experienced at different time scales in different places. For some, it is an acute event. For others, it is an ongoing risk, a difference magnified by rural/urban divides. While some may buy bottled water or boil and cool their water, anecdotally, we’ve heard that many eventually ignore these boil water notices that last for years on end.  Looking at where and for how long it is experienced can point to further questions about the activities going on in a particular place that contribute to risk (for example, agriculture), and the infrastructures, institutions, and investments that respond to risk.